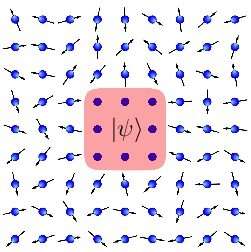 Hybrid quantum-classical spin system. Credit: Skolkovo Institute of Science and Technology
Physicists from Skoltech have invented a new method for calculating the dynamics of large quantum systems. Underpinned by a combination of quantum and classical modeling, the method has been successfully applied to nuclear magnetic resonance in solids. The results of the study were published in Physical Review B.
Physical objects around us consist of atoms which, in turn, are made up of negatively charged electrons and positively charged nuclei. Many of atomic nuclei are magnetic – they can be thought of as tiny magnets, which can get excited by an oscillating magnetic field. This phenomenon known as “nuclear magnetic resonance” (NMR) was discovered in the first half of the 20thcentury. Five Nobel prizes have been awarded since then, first for the discovery and then for various applications of NMR—magnetic resonance imaging (MRI) being the most prominent of them.
Although NMR was discovered more than 70 years ago, it still has some blank spots, such as quantitative prediction of the relaxation of nuclear magnetic moments in solids after NMR excitation. This is a particular case representing a more general problem of describing the dynamics of a large number of interacting quantum particles. Direct quantum simulation is out of the question already for a few hundred particles, for it requires enormous computational resources not available to humankind.
It is then tempting to explore an approximate approach based on simulating the core of a many-particle system using quantum dynamics, while dealing with the rest purely classically—that is, without admitting quantum superpositions. However, it is precisely the quantum superpositions that make the coupling of quantum and classical dynamics a non-trivial task: a classical system is in one state at each point in time, whereas a quantum system can be simultaneously in several states, much like Schrödinger’s cat which can be alive and dead at the same time. It is thus not clear which of the superimposed quantum states governs the impact of the quantum part on the classical one.
Skoltech researchers, Ph.D. student Grigory Starkov and Professor Boris Fine, overcame multiple stumbling blocks and proposed a hybrid computational method combining quantum and classical modeling. “In general, the averaging over quantum superpositons significantly reduces the action of the quantum core on the classical environment. We found a way to compensate such an averaging effect, while keeping the most essential dynamic correlations intact,” Starkov explained. The proposed method was thoroughly tested on various systems by evaluating its performance against numerical calculations and experimental results. The new method is expected to offer broader capabilities to scientists in simulating the magnetic dynamics of nuclei in solids, which, in turn, will facilitate the NMR diagnostics of complex materials.
“This work culminates years of our intensive efforts,” said Fine. “Many teams around the world attempted to make such calculations over the past 70 years. Here we succeeded in advancing the predictive performance of NMR calculations to a new level. We do hope that our hybrid approach will find broad use in the NMR domain and beyond.”
More information: Grigory A. Starkov et al. Hybrid quantum-classical method for simulating high-temperature dynamics of nuclear spins in solids, Physical Review B (2018). DOI: 10.1103/PhysRevB.98.214421