NASA’s Mars Curiosity rover has successfully taken measurements of the density of a mountain on the red planet and finds it more porous than originally thought.

ocks on Mars are more porous and less compacted than scientists expected, according to a study that used data from NASA’s Curiosity rover.
Researchers, including those from Arizona State University (ASU) in the US, measured the density of rock layers in 154-kilometre-wide Gale Crater on Mars.
“What we were able to do is measure the bulk density of the material in Gale Crater,” said Travis Gabriel, a graduate student at Arizona State University.

Findings of the study

The findings, published in the journal Science, show that the layers are more porous than scientists had suspected.
The discovery also gives scientists a novel technique to use in the future as the rover continues its trek across the crater and up Mount Sharp, a five-kilometre-high mountain at its centre.

NASA’s Mars rover Curiosity captured this composite image, which looks toward the higher regions of Mount Sharp, on September 9, 2015.(Image: NASA/JPL-Caltech/MSSS)
As Curiosity ascended Mount Sharp, the gravitational force increased – but not as much as scientists expected.
“The lower levels of Mount Sharp are surprisingly porous,” said Kevin Lewis of Johns Hopkins University in the US.

“We know the bottom layers of the mountain were buried over time. That compacts them, making them denser. But this finding suggests they weren’t buried by as much material as we thought,” Lewis said.

How did the scientists reach this conclusion?

1. Gabriel worked on computing what the grain density should be for the rocks and ancient lake-bed sediments the rover has been driving over.
“Working from the rocks’ mineral abundances as determined by the chemistry and mineralogy instrument, we estimated a grain density of 2810 kilogrammes per cubic metre,” he said in a statement.
“However, the bulk density that came out of our study is a lot less – 1680 kilogrammes per cubic metre,” said Gabriel.
2. The much lower figure shows that the rocks have a reduced density, most likely resulting from the rocks being more porous.
3. This means the rocks have been compressed less than scientists have thought.
4. The engineering sensors used in the study were accelerometers, much like those found in every smartphone to determine its orientation and motion.
5. Curiosity’s sensors do the same, but with much greater precision, helping engineers and mission controllers navigate the rover across the Martian surface. 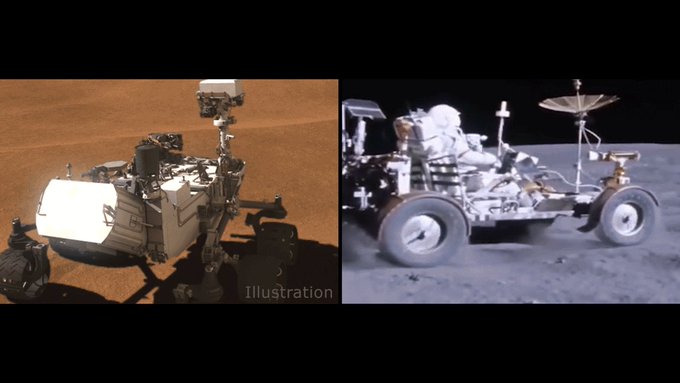 Mars, you are my density.

In ’72, Apollo 17 astronauts measured gravity on the Moon with a special tool called a gravimeter. I repurposed accelerometers to take similar measurements on Mars. Turns out Mount Sharp isn’t as dense as expected

475 people are talking about this
Twitter Ads info and privacy
6. Curiosity’s accelerometers can also be used as a gravimeter – an instrument that can measure gravity – to reveal secrets about Martian geology.
7. Even when Curiosity is stationary, the accelerometers are constantly detecting the slight changes in gravity on Mars, as Curiosity rolls further up Mount Sharp.
8. Researchers used over 700 measurements from Curiosity’s accelerometers taken between October 2012 and June 2017. These were calibrated to filter out ‘noise’, such as the effects of temperature and the tilt of the rover during its climb.
9. The calculations were then compared to models of Mars’ gravity fields to ensure accuracy.

There are many mountains within craters or canyons on Mars, but few approach the scale of Mount Sharp.
Scientists still aren’t sure how the mountain grew inside of Gale Crater. One idea is that the crater was once filled with sediment. How much of it was filled remains a source of debate, but the thinking is that many millions of years of wind and erosion eventually excavated the mountain. 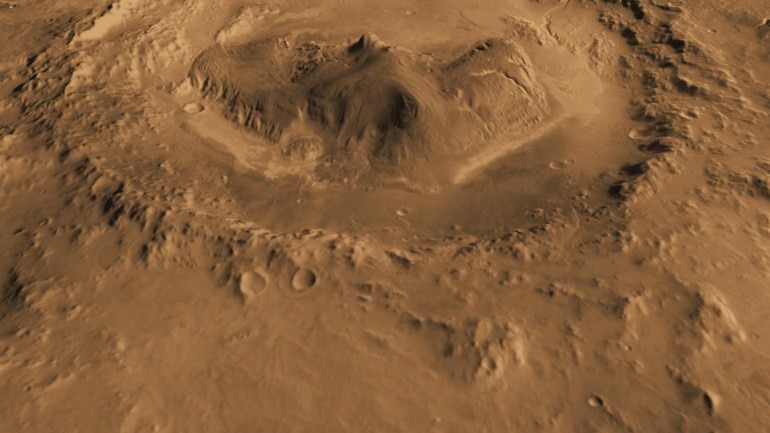 A computer generated image showing Mount Sharp rising from the center of the Gale Crater.(Image: NASA/JPL-Caltech/ASU/UA)
If the crater had been filled to the brim, all that material should have pressed down, or compacted, the many layers of fine-grained sediment beneath it.
But the new paper suggests Mount Sharp’s lower layers have been compacted by only a half-mile to a mile (1 to 2 kilometers) – much less than if the crater had been completely filled.

“There are still many questions about how Mount Sharp developed, but this paper adds an important piece to the puzzle,” said study co-author Ashwin Vasavada, Curiosity’s project scientist at NASA’s Jet Propulsion Laboratory in Pasadena, California.

Mars and Earth are planetary siblings

Lewis said that Mars holds plenty of mystery beyond Mount Sharp. Its landscape is like Earth’s, but sculpted more by wind and blowing sand than by water. They’re planetary siblings, at once familiar and starkly different.
“To me, Mars is the uncanny valley of Earth,” Lewis said. “It’s similar but was shaped by different processes. It feels so unnatural to our terrestrial experience.”
source and credits: indiatoday