EARTHQUAKES have hit the United States today, striking California, Alaska and Oklahoma, are they due to the Super Blood Wolf Moon? Is there any correlation between the lunar cycle and earthquakes?

On Monday, January 21, six quakes have struck the United States – one measuring a magnitude of 4.7. Four earthquakes have hit Alaska, one has hit Oklahoma and another California. Last night a Super Blood Wolf Moon graced the night sky, turning the Moon red in the process; but are the Blood Moon and earthquakes connected?
These struck between 7.59pm Sunday, January 20 (4.59am Monday GMT) and 11.33pm Sunday, January 20 (8.33am Monday GMT).
Meanwhile in Oklahoma, a magnitude 3.6 struck 20km southeast of Helena.
Finally a magnitude 3.3 earthquake hit California, just 5km east-southeast of Cheste 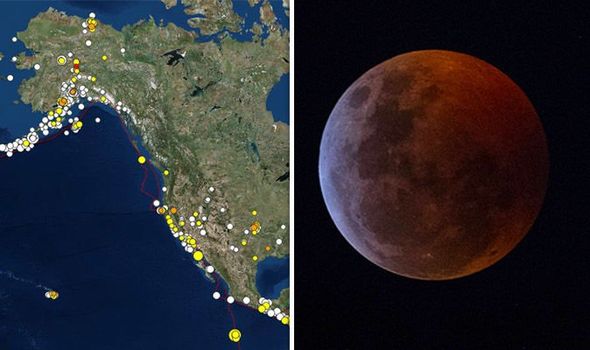 Eclipse 2019 – Earthquakes: There have been several earthquakes already today (Image: GETTY/ USGS)
Is there any correlation between the lunar cycle and earthquakes?
Lunar eclipses occur when the Full Moon passes into the shadow of the side of the Earth facing away from the Sun.
And because a lunar eclipse only takes place during a full moon, tides are higher during this time.
According to the US Geological Survey (USGS), earthquakes can be up to three times more likely during high tides.